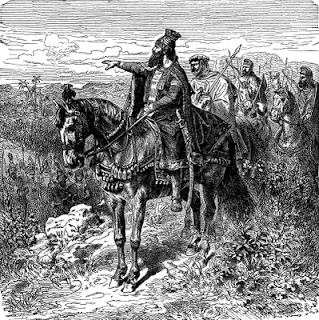 A vital part of retaining command of any expedition is having the fanciest hat.
A sense of direction helps, too.
During the Hollowtown session of Tim's campaign, we ran into an odd situation.  We had decided to head for Helheim Green, and were in the process of negotiating for passage aboard a ship, and for the hiring of a crew.  Being the party treasurer and a covetous old dwarf (gold may not be terribly useful for my quest...  but it sure is pretty), I was concerned that we actually might not have enough cash to make good on Matt's wager and to provide per-casualty hazard pay to all of our surviving crew.  Matt interjected, though, with "Once we get the green dragon's hoard, the expedition should be in the black, though," and then something clicked.

In particular, it seemed to echo something I had read in the rpgist's ACKS playlogs:


"A few days later we're back in Mitylene. The [stone] head they had recovered fetched a decent price, but with two healing potions used the expedition was in the red."

And I went "Oooh...  so this is that old-school resource management thing I keep hearing about!"  (I'm actually kind of joking; Trailblazer is really fairly weak on resource management, what with the short rests  and similar.  Really the primary resource we're having ground down is action points.  But gold is certainly one of some concern these days, too).

More seriously, I think the usage of the term 'expedition' over 'adventure' is likely worthwhile.  An expedition clearly entails going somewhere, likely exotic.  It conjures images of dense jungles, crocodile-filled rivers, scorching deserts, mule trains, sailing ships, and volcano-temples full of bloodthirsty natives. It has an almost pulpy feel to it.  The term adventure is positively bland by comparison, evoking a slight sense of risk, but nothing on the order of an expedition.  Crossing the street can be an adventure, but I would be hard-pressed to find streets where crossing entails an expedition.  Further, an expedition ends, by definition, when you return home.  You may decide to mount a follow-up, but it's a separate expedition.  Likewise, you may build a camp at your destination as a base for forays into the surrounding area, but this is not home or civilization, where there are shopkeepers, taverns, and the rule of law.  This clear start and end provides a nice kind of bookending, and is very suggestive of episodic play.  Adventure, on the other hand, has been confused in this sense; where does an adventure begin or end?  When the dungeon is cleared?  There is no clear answer, and the issue has only been further obscured by hundreds of published modules.

Finally, to return to the beginning, an expedition suggests logistics, and it is fairly natural for english speakers to say that an expedition is in the red or black.  If you say that an adventure is in the black, the natural response is to ask if you're playing Traveller and speaking in the Firefly style.  Thinking in terms of expeditions seems likely to encourage players toward resource management, because it brings to mind such people as Lewis, Clark, and Shackleton, who made a habit of bringing quite a lot of supplies and henchmen with them.  The term "adventurer", on the other hand, has been torn from its roots among the gentlemen-adventurers of previous centuries and, in an RPG context, means "drifters capable of destroying towns", or, colloquially, "murder-hobos."  Also conveniently, one who undertakes expeditions is not an expeditionist, expeditioneer, or other noun; it is to the players to choose titles for themselves, rather than "adventurer."

So: come summer, when I too run ACKS, there will not be adventures.  There will be expeditions.  And I quite look forward to using the Wilderlands of High Fantasy Ruins and Relics table to generate targets for them (even if I am unlikely to run a game in the Wilderlands, it's a good table).
Posted by John at 6:00 AM