Historically, my players have been very afraid of running out of food in the wilderness.  This seems like a pretty reasonable concern.  For ready reference, here is a summary of the scattered RAW on rations and foraging and such, as well as a discussion of some implications and potential houserules.


Each day, characters must consume food and drink weighing a total of one stone.  This assumes 2lb of food and 1 gallon (8lb) of water.  Failure to consume enough food does not significantly affect a character for the first two days, after which he loses 1 hit point per day.  Furthermore, at that point the character loses the ability to heal wounds normally, though magic will still work.  Eating enough food for a day (over the course of about a day, not all at once) restores the ability to heal, and the character will recover at the normal rate.

Inadequate water affects characters more swiftly; after a single day without water, the character loses 1d4 hit points, and will lose an additional 1d4 hit points per day thereafter; healing ability is lost when the first die of damage is rolled.

When in the wilderness, characters can hunt or forage for food.  Foraging for food is an activity that can be accomplished without hindering travel by gathering fruits, nuts, and vegetables. For each day of travel while foraging, a character should attempt a proficiency throw of 18+ on a d20. A successful result indicates that sufficient food for 1d6 man-sized creatures has been acquired.

Hunting succeeds on a proficiency throw of 14+ and indicates that sufficient food for 2d6 man-sized creatures has been acquired. However, hunting must be engaged in as the sole activity for a day with no traveling possible. In addition, there will be one wandering monster check, from the table appropriate to the terrain, while the group is hunting.

Characters with the Survival proficiency gain a +4 bonus on their proficiency throws to hunt and forage.


While on sea adventures, characters must consume food and water as described under Wilderness Adventures, above. Rowers must consume 3 gallons of water per day rather than the standard 1 gallon, so their supplies have an encumbrance of 3 stone per day. Standard rations are perishable and inedible after one week, so on long sea voyages most characters will eat iron rations. After one month at sea eating iron rations (that is, without eating fresh fruit, onions, or potatoes), characters begin to suffer from scurvy. Characters with scurvy lose 1 point of Str and Con each week. If either ability scores zero, the character dies. A scurvy-stricken character regains 3 points of Str and Con each week he eats fresh food.

Characters can fish if the ship is becalmed or otherwise anchored. For each day of fishing, each character may attempt a proficiency throw of 14+ (gaining a +4 bonus if the have the Survival proficiency). A successful result indicates that food enough for 2d6 man-sized creatures has been caught.

The description of the Survival proficiency, on page 64:


The character is an expert in hunting small game, gathering fruits and vegetables, and finding water and shelter. The character forages enough food to feed himself automatically, even when on the move, so long as he is in a fairly fertile area. If he is trying to supply more than one person, he must make a proficiency throw (as described in Wilderness Adventures), but gains a +4 bonus to the roll.

A final thing to note in all of this is ACKS' natural healing rate.  Per page 105, "For each full day of complete rest in reasonably sanitary conditions, a character or monster will recover 1d3 HP.  If the rest is interrupted, the character or monster will not heal that day."  There is no natural, universal overnight healing from normal rest, that I can find.  This casts the Healing proficiency into ambiguity: "A patient under treatment of Healing naturally heals an extra 1d3 hit points each day."  Presumably (and I think we've been playing it this way), that applies to bed-rest healing, rather than providing overnight healing.  I think there's also an argument to be made that the Cure spells that Healing grants are also intended to be applied to bed-resting patients, rather than as first aid (with the exception of Neutralize Poison, which requires expeditious use, and Comfrey, which is explicitly marked for use "after a battle", and notably tracks usage separately from "patients").  This interpretation is supported by the "Campaign Play" article, published in Axioms on 6 Sept 2016, which lists Healing as a "major" activity, or around six hours of work a day to care for 3/4/5 patients - consistent with "patients" being people under bed rest (but see here for counterpoint...  but that leads to some really weird interpretations with healing fading when you switch patients, which doesn't make any sense at all).  The Cure Light/Serious functions of Healing should be surgery - that's why Healer 3 NPC specialists are "chirurgeons".  So that's very interesting - I expect we'd still see Healing 1 a lot in dungeoneering play, for the mortal wounds bonus and Comfrey use, but Healing 2 and 3 would be much rarer under this interpretation.  What would our mages do with all those general proficiencies freed up from Healing, I wonder?  Some actual wizard-knowledge, perhaps?

Some other interesting things that fall out of the rations rules, under inspection:

Your average character forages successfully 15% of the time (about one day a week), and finds on average enough food for 3.5 characters.  In expectation, you will tend to find about half a man-day's worth of food per day, without Survival, while traveling at full speed.  Obviously, this is somewhat swingy, but with more characters will tend to average itself out.  Depending on how you interpret the starvation rules, this may make starvation quite difficult for large parties.  If starvation's effects only trigger after two consecutive days without food, and a large party tends to find half a man-day of food per forager, each character can (on average) eat every other day and avoid starvation indefinitely.  Granted, this might not be great for morale (UPDATE: see here); I also recommend not ordering pizza during such sessions, to get players in the right mindset.

With Survival, that increases to 1.22 man-days of food per day.  The fact that survivalists can always feed themselves without a roll is also a nice bonus, both because it is reliable and because it reduces the amount you have to carry on expeditions when you are carrying rations.

Hunting yields 2.45 man-days of food per hunter*day in expectation, or 3.85 with Survival, but it also costs a man-day of rations per hunter to execute, since it takes a full day without travel.

If the party is traveling along rivers or camped by a lake, fishing is a safer option than hunting, with equivalent yields but no additional random encounter roll.

For mid-level characters, starvation can take a very long time.  A 5th-level mage averages 12.5 HP, and can go two weeks without food (a bit lower than the "three weeks without food, three days without water, three minutes without air" rule, but that's d4 HD for you).  In those two weeks, you will in expectation find food by foraging twice, which on average buys you roughly a week of not-starving (plus four additional days of "not significantly affected" per success).  But wait, that week of not-starving buys you an extra 5.5 days of not-starving in expectation, which buys you an additional ~3 days of not starving, which buys you an additional...  there's a recurrence here.

This is a somewhat annoying recurrence.  I've poked at it with math for a bit, and I think the easier solution is probably Monte Carlo models. Basically you run a bunch of trials (like, 100,000) and observe the outputs statistically. 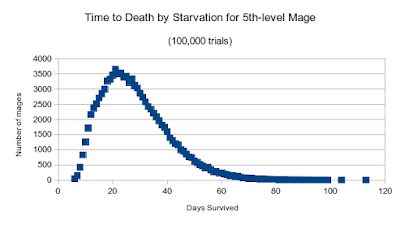 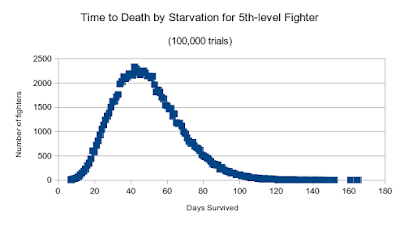 ...  well that got rather grim, didn't it?  The bottom line, though, is that two weeks without rations is less dangerous than the average dungeon crawl, with 12% wizard casualties and less than 1% fighter casualties.  Henchmen might have a rougher time, though a 3rd-level fighter henchman would have superior HP to a 5th-level MU, on average, and should endure starvation comparably.

And again, that's with no healing, no magic, no survival proficiency, no cleverness, no law of large numbers on multiple party members, nothing - pretty much the worst case, minus monsters.  That's also time that you can spend traveling (hopefully home), because you can forage on the move.

So my conclusions from this analysis:

Due in part to the recent Hexographer 2 beta releases, I've been playing around with building a microsandbox - 10 hexes by 10.  I'm not happy with it yet, but here are some notes that have come out of it:

Posted by jedavis at 9:54 PM No comments:

'bit late on the uptake this time, but there's a new ACKS kickstarter, for the Heroic Fantasy Handbook and Barbarian Conqueror King.  The Heroic Fantasy book has been in the works for a long time; I acquired a draft copy a year or two back (thanks Alex!) and we used some of the rules from it (mostly Warrior Code) in the Midnight ACKS campaign.  I'm looking forward to seeing it in its finished form.  I've been reading the Poetic Edda and kicking around a low-magic, Iron-Heroes-esque "mythic Scandinavia at the turn of Christianity" setting, and this should support that well (provisional name: "ACKS-Age, Sword-Age").

I'm a little less excited about Barbarian Conqueror King.  Nothing against Omer, I'm just not huge on pulp.  That said, there was a preview of some Expedition to the Barrier Peaks-style rules for figuring out how to use and repair advanced technology, and it reminded me of D20 Apocalypse...  and that got me thinking further that ACKS and Darwin's World were sort of made for each other.  Then again, maybe Crawford's already done it better with Other Dust.
Posted by jedavis at 10:14 PM No comments: