Parties in the wilderness levels in ACKS often run into difficulty with buying and selling goods in small markets.  The intended, long-term solution to this is to found a domain and build a market.  A shorter-term fix is the Venturer, which boosts market class.  The Venturer's ability, though, is very front-loaded and has no gameplay to it.  Commissioning goods is another workaround, but one which takes lots of time.

Enter that master of quick and easy short-term solutions with long-term side effects: the thief.

Black Market
Thieves are adept at locating merchants who might be overlooked by more scrupulous characters, the sort of merchants who deal in dubious goods with an exclusive clientele.  A thief in search of a buyer or seller of a particular sort of item may make one Hear Noises throw per day spent in seedy taverns.  On a failure by 10 or more, or on a natural 1, there are simply no goods of that kind for sale on the black market this month.  On a success, the thief locates a merchant who allows him buy or sell the good as if the market class was one class better (like Commissioning).  There might be a catch, though.

If PCs attempt to pass off hot or defective goods, the merchant likewise makes a Finding Traps roll and may demand a discount or refuse to transact if successful.

I guess you could let any class do this, with the standard 18+ Hear Noises and Find Traps throws...


Man I'm gonna name everything thief-related after cocktails now, that was a good idea.
Posted by John at 7:23 PM 2 comments:

Went hiking a week or two ago with team from work at Wallace Falls, up to the Skyhomish Valley Overlook.  Two or three interesting observations.  Not much in the way of wildlife, just people and their dogs.  Clear day, cold in the morning but it warmed up, as one might expect.

First, even though we had looked at the posted maps and had plenty of cell coverage, we ended up taking a little detour out to about the DNR road I think?  The social dynamic, in particular, was that management thought they knew where we were going and junior engineers were correctly skeptical but didn't speak up loudly enough.  So this poses a pretty funny potential explanation for getting lost with increased party size, and a reason that navigation shouldn't necessarily just scale with the number of characters with Navigation proficiency - it's a "never bring two clocks to sea" sort of situation, if one navigator gets it right and the other gets it wrong.

So this is why I'm not really sure how far we went, or how much total elevation change we did.  Our highest point was about 500 feet above our starting point.  It took us around three hours, which would make sense for about four miles each way plus elevation.  But...  even looking at a map now I'm not sure how that could've happened.  Backtracking off a wrong turn is doubly expensive I guess.

In any case, getting lost is definitely a topic which I should think more about, for developing a gameplay loop for wilderness adventures.

Second, I pulled something in my knee (IT band I think) about a quarter of the way in, and boy howdy the rest of the hike was fun.  Didn't do anything particularly stupid, just walking and gradually ow.  The wilderness damage is real.

Finally, splendid visibility, leading to some observations for the "describing the wilderness" problem.  More than I expected!  Although I suppose 500' is a fair bit of climbing to do just for a view; might be some interesting choices and tradeoffs during wilderness adventuring, spending time climbing stuff to see more hexes away.

To the south, a dirt road on the hills on the other side of the river, about 10 miles away and I reckon 12-15 feet wide, was clearly visible to the naked eye as a result of contrast, yellow dirt among green trees.  I hadn't considered the visibility of preindustrial roadways in adjacent hexes before.  A sandy island in the river, a quarter mile wide, was easily visible at a similar distance, again by contrast. 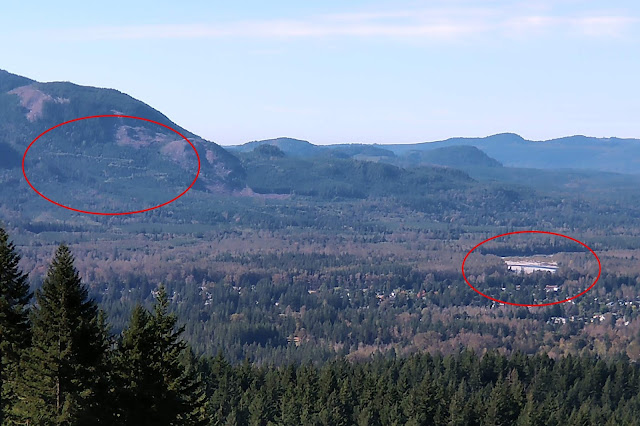 Turning further west, the Olympic mountains, about 70 miles away over the Sound, were likewise visible.  The gap between the last line of near hills and the mountains is very hazy, almost a white line; I'm not sure if this is due to humidity off the water, or something with the horizon.  If it is a water humidity effect, it might be useful for signaling to players an intervening, distant large body of water.  If it's a horizon effect, then it might be useful for signaling that the mountains they're seeing are further than the calculated horizon (about 45 miles, at the elevation we were at).  The edge of the Sound was about 45 miles away, so hard to call either way. 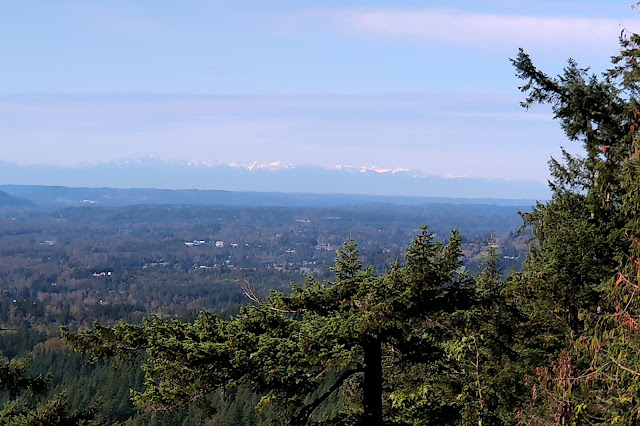 And then to the east and north, the view was pretty well blocked by the mountain we were on.

This whole post-hike process that I do, where I go correlate stuff I saw to things on google maps and try to figure out where it was and how to get there, seems like a much looser version of the exploration loop that you'd get in the wilderness with a paper (er, vellum?) map in hand.

Finally finally, for all that "door or cave hidden behind a waterfall" is a bit of a trope at this point, it seems like that would actually be rather dangerous, given that the pool into which the water falls tends to get deep and be churned up.
Posted by John at 6:00 AM 2 comments: