Notes from a Sailing Course

After many years of putting it off, I finally got around to getting some sailing lessons this summer.  Some D&D-relevant notes from instruction and the manual, in the style of Notes From a Hiking Seminar:

I was already familiar with points of sail so I'm not going to talk about that much here.  I have yet to go back and re-evaluate the water travel rules in light of what I have learned. 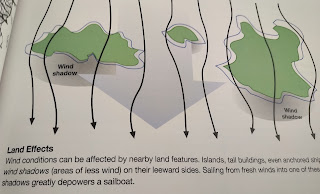 Land makes wind shadows.  This was very apparent when we were under sail; even small, unimpressive islands were doing it.  It made me wonder about figuring prevailing winds on a per-hex basis, or otherwise getting much more micro with climates than I usually think about.

Expected survival times in water of varying temperatures under varying actions.  Cold water is very bad for your health!  One of the things I read suggested that about half of all "drowning" victims actually die of hypothermia while floating, rather than dying of water entering the lungs.  And swimming to produce more body heat is actually disadvantageous a lot of the time, since your clothes are a crappy wetsuit that holds water that you've warmed next to your skin, but swimming tends to flush them.  In any case, assuming these times are for normal men with d6 HP, we might reasonably conclude that 35 degree water does a point of damage every 20 minutes, 55 degree water a point every hour, and 70 degree water a point every four hours or so.

Nautical charts - they're definitely maps.  I don't think I've ever seen an adventure that took a nautical chart and imposed a hex grid over it but it could be fun.  And there are plenty of them available for free from NOAA (granted, some in an obscure file format used by electronic chart plotters on ships).

"My [the instructor's] wife likes powerboating better than sailing - it's less mysterious".  In a bronze age setting where sailing is a new technology and mystery cults abound, a cult of the mystery of the sail would be fun.

An interesting definition of "seaworthy": "the vessel is competent to resist the ordinary attacks of wind and weather, and is competently equipped and manned for the voyage, with a sufficient crew, and with sufficient means to sustain them, and with a captain of general good character and nautical skill."  Bit of a "what is steel compared to the hand that wields it?" point of view.  And contra OSE's classification of vessels as seaworthy or unseaworthy independent of captain and crew.

On interpreting weather forecasts: "If a forecast calls for a 45% of high winds assume you will be sailing in heavy gusts 45% of the time."  Could have applications for generating weather during a given random encounter - sure you know the big picture of the day's weather, but maybe the encounter is during a lull.