HOSTILE is a setting book for Cepheus (an OGL clone of Mongoose Traveller 1e) very explicitly inspired by grungy, industrial 80s science fiction movies including Alien, Aliens, Outworld, Silent Running, The Thing, and Blade Runner.  The spaceships are dimly lit with metal grille floors, the aliens are not sentient but definitely carnivorous, space is for working-class heroes crewing 10k dton ships rather than tourists in 200 dton ships, FTL travel makes you go mad if you're not frozen, videophones live on your desk rather than in your pocket, and the corporation is usually hiding something.

This is a pretty darn good setting, and I could absolutely see using it more-or-less as written.  I think it will probably make a lot more sense than Traveller's default setting to many people my age, since it's grounded in media that they've at least heard of. 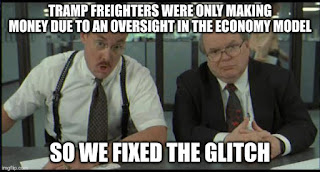 In any case, despite my complaints, this setting does a good job of evoking the feeling that it sets out to evoke, and as stated at the beginning, I could absolutely see running it with few changes to its canon, or mining its ambiance and technology for a less corporate but still grungy setting.